This traditional Hungarian goulash is probably not like the goulash you have tried before unless you have been or lived in Hungary. This is a traditional goulash recipe from my travels through Hungary and time spent living and cooking in central Europe.

If you’re looking for a vegan/vegetarian alternative, have a look at my Vegan Hungarian Goulash recipe.

This Hungarian goulash recipe uses traditional ingredients that are slowed cooked in the slower cooker until the meat becomes tender and the stock has developed flavour. It takes a long time to break down collagen in tough cuts of beef used in goulash, which is why the slow cooker is ideal for this recipe.

Why Not Use Lean Cuts of Beef Instead?

The collagen in tougher meats plays a crucial role in developing a rich stock. When slow cooking, collagen in meat is broken down into gelatine which thickens and adds richness to your stock. Therefore there is no need for additional thickeners like flour or cornstarch.

What Does this Slow Cooker Hungarian Goulash Taste Like?

This slow-cooked Hungarian goulash has a rich spiced taste with a depth of different flavours. It has a mild sweetness from the pork fat, paprika and red pepper and richness from the browned onions, beef shin and stock. This richness and sweetness is then balanced out with fresh herbs and tender vegetables.

When Is a Good Time to Cook This?

Anytime! This recipe is delicious and eaten all year around. I personally like to cook this on a weekend when I can spare 20 minutes of prep time in the morning. Then it’s excellent; I just let it cook away with no worries about needing to make lunch or dinner later that day.

Do I Have To Use a Slow Cooker?

No, you don’t. You can swap the slow cooker with a large pot with a lid and apply just a few small tweaks.

Why Did I Use a Slow Cooker?

I used a slow cooker to make the recipe easier and more full-proof. The heat is well rounded and never catches on the bottom, and because of this, you don’t have to stir the goulash.

There are no worries about catching or overcooking, simply set it and forget it. Once the timer has finished, it will stop cooking and place the goulash in hot hold mode.

What Type of Slow Cooker Should I Use?

Make sure to use a good quality slow cooker. I am currently using a 3.5L slow cooker which works perfectly for this batch size. The slow cooker was about half full, which left me a little room if I wanted to increase the batch size for next time.

For most recipes, it’s a good guideline to have the slow cooker around 50% to 75% full to avoid under or overcooking. Use these ingredient ratios as a guideline when cooking in different slow cooker sizes.

Since I’m currently 45 minutes from the Hungarian border whilst making this recipe, the traditional ingredients are really easy to pick up. If you can’t find all the ingredients and need to make a few tweaks, don’t worry, I will give you the best replacement possible for each harder-to-get ingredient.

Pork Fat is very popular in Hungary, it adds richness and sweetness to the goulash. – The best alternative would be Neutral Cooking Oil like Canola or Vegetable Oil.

Beef Shin is an excellent choice of meat; it’s reasonably cheap and has a lot of collagen that breakdown into gelatine whilst cooking, which adds richness.. – The alternative is Beef Chuck; this is also a great choice and has a similar cooking time.

Goulash originates from Hungary and has been around since the 9th century. The recipes have been slowly tweaked and refined over time. It wasn’t until the 16th century when paprika was added, which is now considered one of the most important flavours of goulash.

Ingredients not in Goulash

In the 4 years I spent travelling & living around Hungary, Slovakia, the Czech Republic and Austria, I have never seen a recipe with macaroni, ground beef, cheese or flour. I have also worked inside prestigious 5-star hotels with Hungarian chefs, and they can confirm that it’s not a thing.

This type of goulash is more of a ‘Spag Bol’ with the addition of a pinch of paprika and swapping the spaghetti for macaroni. To me, this is more of an American Italian pasta dish, which is something completely different to this recipe.

1) Melt the pork fat in a large deep sauté pan over medium-high heat. Add the onions and brown them for 5 to 7 minutes.

2) Turn up the heat, add the beef and season with salt and pepper. Sear the beef on each side, this will take 3 to 4 minutes. Add the garlic, mix and sauté for 30 to 45 seconds.

3) Add the Hungarian pepper and sauté for 3 to 5 minutes, until slightly softened.

4) Turn off the heat, add the Hungarian paprika and mix thoroughly. Let the residual heat toast the paprika. 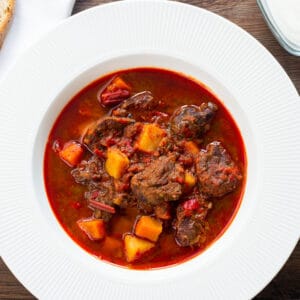 Jack Slobodian
This traditional Hungarian Goulash is probably not like the goulash you have tried before, unless you have been or lived in Hungary. This is a traditional goulash recipe from my travels through Hungary and time spent living and cooking in central Europe.
5 from 6 votes
Print Recipe Pin Recipe
Prep Time 30 mins
Cook Time 5 hrs
Course Main Course, Soup
Cuisine Hungarian
Servings 5 people
Calories 438 kcal

Sides & Toppings Try this recipe with a side of good quality bread and topped with a heap of sour cream.

This is perfection. Having lived in Prague and spent several yearly holidays to Austria.. this is the real deal. So easy and satisfying. I think the prep time is longer…but all worth it. Definitely should be served with warm dark bread and some pickles. Thank you for sharing, this is a keeper!

Thank you Mandi, I'm really glad you like it! I visited Prague 4 years ago, it's such a beautiful city. I've been meaning to go back and take my family there!

No mention of stock in the instructions l

The stock is included in the start of step 4 "Add all the Ingredients into the slow cooker". I hope you made the recipe okay!

Hey Jack, it looks like the only TRADITIONAL recipe I've found for my slow cooker. I still remember the flavours of the goulash I´ve tried in Czech Republic a few years ago. Looking forward to try it in Argentina!

I hope you enjoyed it! They have some good meat in Argentina!

Works well in a slow cooker. I've used pork instead of beef and this works just as well.

@Jack Slobodian, I was taught that pork is the protein used in Hungarian goulash; why? there are more pig farms in Hungary that cattle farms, so pork is the more readily available meat and is cheaper too. This last point is important in that money is a problem in Hungary for those living in the countryside (where the recipe originally came from apparently).

Also taught that prior to serving, put 1/2 pint of sour cream in the pot; stir and then then slow cook for another 20 minutes

Thanks Marion, I'm glad you enjoyed it! Pork is the go to next door in Slovakia :), they love it!

Delicious ...add polenta (white or yellow) if you like, for a super filling winter meal!

That sounds like a delicious idea! Glad you enjoy it!