Rogan Josh is a North Indian curry from the region of Kashmir. Traditionally served with lamb or goat, with the addition of alkanet flower or root and Kashmiri chillies. Brought there by the Mughals with the influence of Persian cuisine, it has become a staple dish in Kashmiri cuisine.

Ghee is a type of clarified butter that is used in ancient Indian cuisine. It’s made by cooking clarified butter for longer during the separation process which caramelises the milk solids, this results in a nutty caramelised flavour. It has a higher smoke point than butter which makes it ideal for sautéing.

Kashmiri chillies are mild & vibrant chilli with strong red hues. They are used in Indian cuisine not to add heat to the dish but to add flavour and their vibrant colour. They are somewhat similar to paprika.

Cinnamon is a spice that is from the inner bark off ‘cinnamon’ trees like Cinnamomum verum which is native to sir Lanka. This spice is now highly available and used throughout most of the world. It has a very strong flavour so it is normally used in small quantities.

Alkanet root is a herb that belongs to the borage family. The alkanet plant has a bright blue flower and a black and dark red root. It is commonly used as a source of red dye and is popular in Indian cuisine to add colour to the recipe. The alkanet flower & root is not approved for food colouring in the European Union due to potential side effects of the plant. This is why I have avoided this ingredient in the recipe.

Gingerol in Ginger which is a relative of Capsaicin has powerful anti-inflammatory and antioxidant effects. It used for a variety of natural medicines and is believed to ease the effects of nausea, reduce muscle soreness and improve digestion.

Is another vegetable that has been used in food medicine for thousands of years. It has been referred to as ‘Russian penicillin’ due to its antibacterial properties.

Capsaicin in chilli is linked to increased metabolism by burning fats, pain relief and reducing insulin spikes for diabetes. 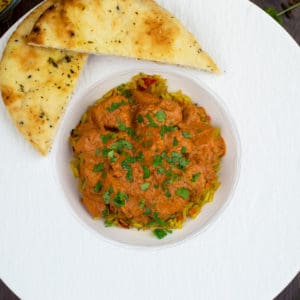 Spices (tied in a spice bag)

You had me at just one hour! So easy and packed with so many amazing spices. Yum!

My family loved it! Really tasty and delish!

I am very glad they enjoyed it! :)

Great recipe! the flavor was there. And it took less time than other recipes. We will be making this chicken organ josh more often.

Thank you, I am happy you liked it!

You were right this was surprisingly easy to make! So good!

This sounds so delicious!! I had never heard of it before but I will defnitely try it out next time I'm craving some indian food!

Oooh then you will be in for a nice surprise :)